I started writing this post in July of last year but then life (and death) happened and it never got finished. Sitting today looking out at our garden springing (literally) into life after the winter, I thought now would be a good time to recap what came out of it last year.

The harvest wasn’t all that we might have hoped for. Insects got to a fair number of our plums and because we were away from home for much of July and August, our local birdlife got to enjoy much more fruit than they would usually have. I’m still particularly bitter (pun intended) about the gooseberries. It wasn’t all bad news though.

We did discover that home-made fruit schnapps diluted with soda water makes for lovely, refreshing drinks for summer evenings. Pictured are apple and elderberry; we also had rose hip which was surprisingly reminiscent of Pimms. 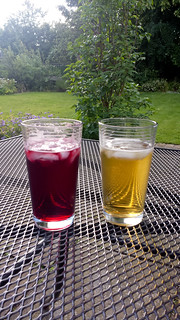 Also, even though there was a lot of insect-damaged fruit, we did still get what, by any reasonable definition, would be considered a lot of plums. Last year’s lists of recipes came in handy and we even managed to find some new ways to use plums, including a nice brown sauce recipe from the Ham, pickles & jam recipe book from Thane Prince. The usual batches of jams and chutneys were made and we also bottled and froze some which we’ve been enjoying in crumbles throughout the year.

The big new thing last year though was turning this: 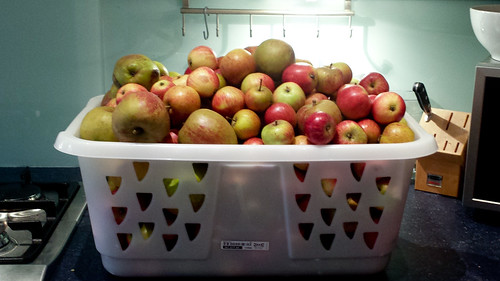 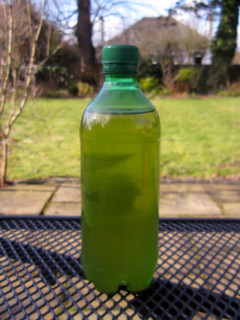 The first picture is of a laundry basket containing 25kg of apples (all from our garden) that became several litres of home-made cider. It turns out that making apple juice is hard work but turning that apple juice into cider is pretty easy. Due to a poor juicing technique when I started, we didn’t get as much cider from the apples as we probably should have* but, now that we have the right equipment and a better idea of what we’re doing, I’m looking forward to a much bigger batch later this year. Watch this space!

* We did get more than the single bottle pictured—this was just all that was left by the time I thought to take a picture.