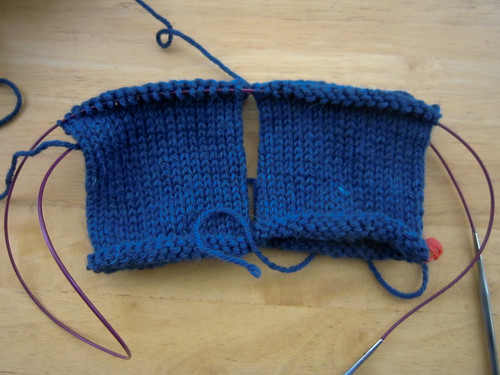 It’s two things, on the same needle, being knitted at the same time! (I may be unreasonably excited about this.)

I’ve wanted to learn how to knit two-at-a-time for a while now. Since I seem to have turned into a sock knitter (and designer) despite my early reservations, the idea of being to knit two identical socks held a lot of appeal. While it would probably have been possible to learn from the internet, sometimes it’s just easier and more fun to take a class.

Which is why, two weeks ago, I took a Two-at-a-time Anything workshop taught by Clare Devine at Ginger Twist Studios in Edinburgh. It was my first time at the shop which is absolutely tiny yet still somehow stuffed with a beautiful range of yarns (also available from the website) without being so stuffed that you feel overwhelmed. The advantage of the shop being tiny is that workshop numbers have to be small so there were just four students which meant plenty of opportunities to ask questions or get one-on-one help from Clare. However, as it turned out, we didn’t really need much of that. After some initial hiccups at the casting-on stage (which led to much discussion about how to avoid accidentally knitting with the tail when using a long-tail cast-on), we all seemed to settle into the natural logic and rhythm of knitting two things at the same time and the workshop turned into more of a tea and chat while knitting session which was also great.

The workshop project was a pair of armwarmers (really just two stocking stitch tubes) although the notes do include a pattern for a pair of socks with full instructions on how to manage adding heels and toes when working two-at-a-time. I’m undecided as to whether to just cast off the armwarmers as they are or whether to try adding a heel to them for practice. They’re a bit narrow for me to wear as socks but I might be happy to sacrifice the yarn for the sake of expanding my knowledge of the technique. On the other hand, it’s not very warm today and a new pair of armwarmers might be just the thing!