There are approximately 11 days, 23 hours and 18 minutes until my sister’s wedding. The ivory-coloured blob in the picture below is intended to be her veil. In theory, there are the equivalent of about 14 rows of knitting left to do including the cast-off which, at the speed I’ve been averaging on this project, is about 12 hours of knitting. However, there are also a number of dropped stitches and other mistakes that need to be corrected (anywhere you see a safety pin in the pictures) and then there is the blocking which is going to be long and painstaking. Did I mention that I’m working full-time for 8 of those 11 days and that I’ve been asked if the veil can be ready for the Tuesday night before the wedding so that my sister can try it with her dress so really there are only 9 days (of which I’m working 7), 3 hours and 18 minutes? Or that I would really quite like to add another couple of repeats of the final pattern to make it just slightly bigger? It’s do-able but I’m definitely feeling the pressure. 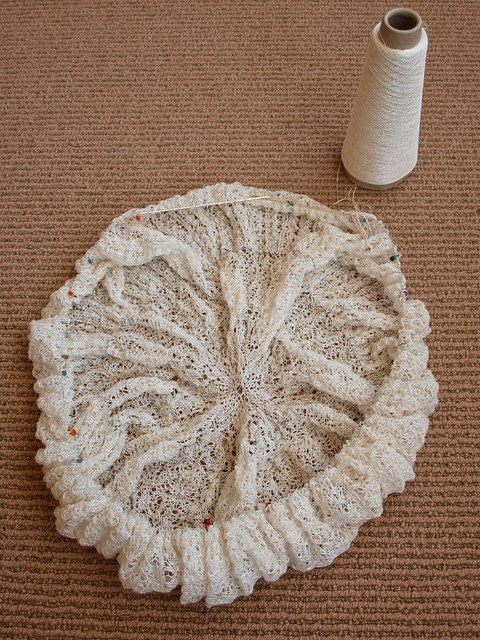 The stitch markers are probably my favourite thing about this project. They’re from fripperies and bibelots on Etsy and come in a delightful little metal tin. These are the “ringOs Mini”and I can confirm that they are absolutely snag-free. They are slightly too big for the needles and yarn that I’m using but that’s because I’m using smaller yarn and needles than any sane person should ever use to knit a garment for an adult. The sets are sold in a variety of colours but the sock knitting sets include “traffic light” markers for marking particular sections of the pattern which I’m using as a visual guide to how far through each round of knitting I currently am. Green marks the first third, amber the middle third and red means that I’m in the home-stretch and need to watch out for the end of round marker to switch to the next row of the pattern. 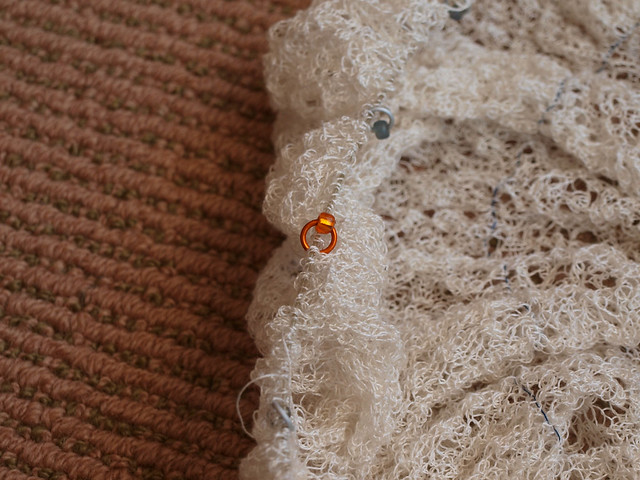 Speaking of smaller yarn and needles than any sane person should use: the yarn is SS60 Pure Silk from Texere Yarns (3000m per 100g cone) and I’m using 1.75mm Knit Pro needles. My mum (who is probably even more stressed about this project than I am) keeps telling people that “the yarn is so thin, it’s almost like thread” to which I keep pointing out that technically it is thread! (The picture below shows a strand compared to a UK five-pence piece and a US 1-cent coin.) It is knitting up beautifully though. The stitch marker picture above really captures the sheen and softness that the finished veil will have. 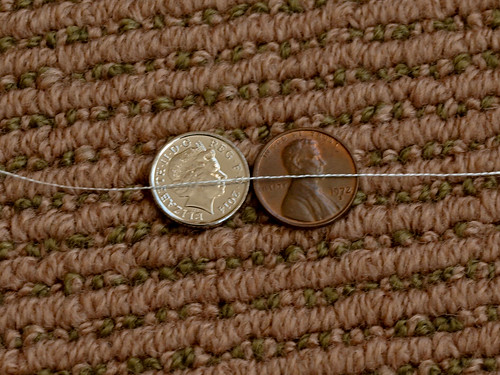 The pattern is my own design and incorporates elements to represent the bride, the groom and their relationship. The centre of the shawl has rings of yarnovers to represent the wedding rings. Then there are shamrock leaves (Irish groom) and thistles (Scottish bride): 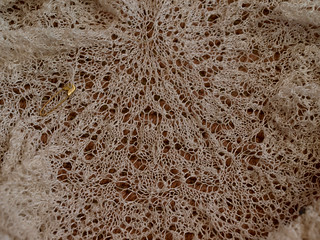 There are mountains (which is where the proposal took place): 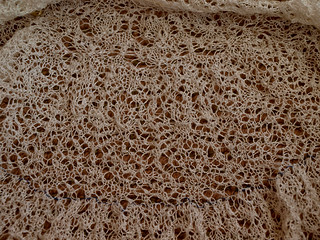 And, finally, hundreds upon hundreds of little love hearts: 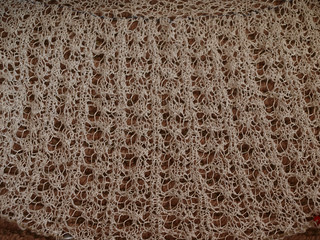 I realise that I may be the only person in the world who can currently “see” those elements but I did swatch and they will really pop after blocking (remember when I said the blocking was going to be painstaking?). My sister wanted a shawl/veil that was “just for her” so I won’t be publishing this as a for-sale design at any point but I will put some extra details on a Ravelry project page once it’s done.

Check back in about two weeks’ time for post blocking pictures, hopefully including action shots from the day!