After the wedding, I “borrowed” the veil to wash it, reblock it and take some better pictures of it since I hadn’t had time for those before I had to get it to the bride. I’m really glad I did because I found this: 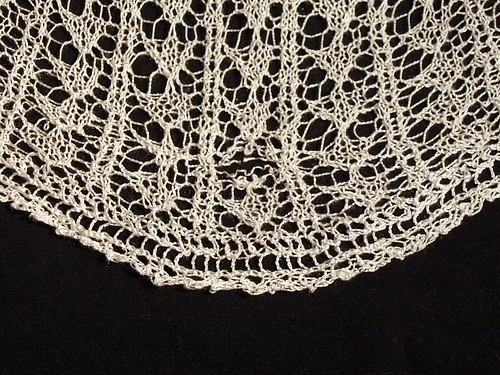 That, my friends, is a rip: one cut or snapped thread and two unravelled rows. I did see one of the guests get her bracelet caught in the veil when she hugged my sister so I think the thread was either snapped or weakened at that point and it was just very lucky that there wasn’t a bigger hole by the time it was spotted.

After an initial moment of panic, I caught all the loops that I could see with safety pins to prevent anything unravelling further: 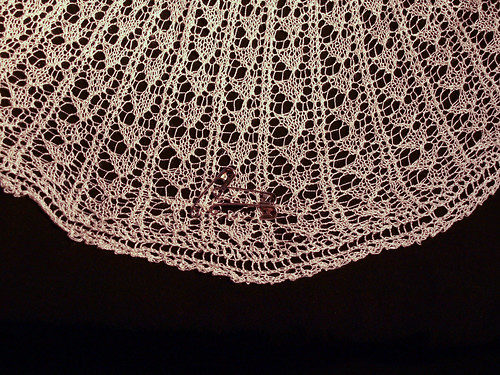 Then I put the shawl aside for 24 hours while I gathered the courage to tackle the repair.

The next evening I sat down with a glass of wine and some chocolate and started researching how to repair lace shawls. I was surprised to find that there’s very little information out there. Endless tutorials and videos on how to repair mistakes in lace as you’re knitting it and references to a couple of books that might have more information: Margaret Stoves’ Wrapped in Lace (available in hard-copy but not electronically and wouldn’t be with me before I had to return the shawl) and Elizabeth Lovick’s Magical Shetland Lace Shawls to Knit (due to be published September 2015) but almost nothing that could help right there, right then.

What I did find was a very old Knitty article on general knitting repair which helped me figure out a plan.

I had two missing rows of knitting and had the loops of the stitches in the row above and row below these. For one of the missing rows, I had the unbroken strand of yarn that should form the loops of that row but the strand for the other was the strand that had snapped. I was also lucky that the sections of the two rows that had unravelled were basically stocking stitch so there wasn’t any complicated lace patterning to be recreated.

Tackling the easier problem first, I used a crochet hook to re-form the stitches using the unbroken strand pulling the strand through each of the loops in the row below in turn and placing the newly formed stitches onto a holder.

For the other row, I grafted the stitches that I had just made with the crochet hook to the loops of the row above using Kitchener stitch with a length of spare yarn and a sewing needle. I tried to make sure when I was securing the ends of the new yarn that I also caught the ends on either side of the section of yarn that had split so that it wouldn’t unravel any further. 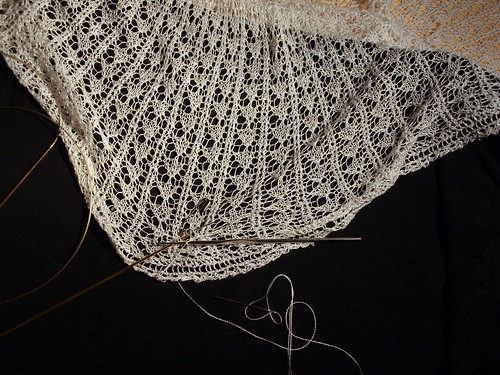 The finished repair isn’t perfect. I should possibly have added an extra horizontal strand as described in the “Tears and holes — weaving method” section of the Knitty article before grafting. However, you have to look quite carefully to find it and it won’t be visible when the shawl is used. 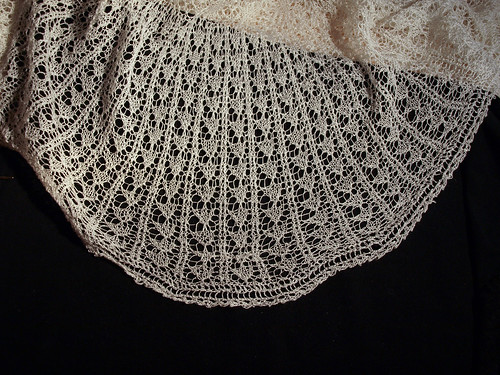 Also, the shawl already has quite an “antique” feel to it (lots of the wedding guests couldn’t believe that it was finished less than 72 hours before the wedding and not decades earlier) so a small repair absolutely isn’t out of place in an item that is hopefully going to be a beloved family heirloom.

I also hope that if you’ve found this post because you’re looking for the same help that I was that it has been useful!